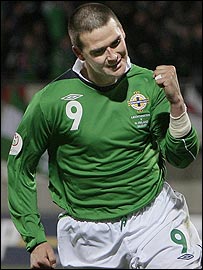 Northern Ireland striker David Healy has been awarded an MBE in the Queen’s Birthday Honours List.

The Fulham forward has been recognised for services to football and to the community in Northern Ireland.

Healy is NI’s top scorer with 34 goals in 65 games and he received a special award for netting a record 13 goals in the Euro 2008 qualifiers.