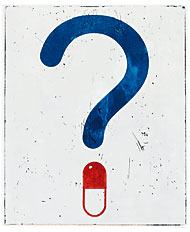 AN expression of true love or raw hatred, of purest faith or mortal sin, of courageous loyalty or selfish cowardice: The act of suicide has meant many things to many people through history, from the fifth-century Christian martyrs to the Samurais’ hara-kiri to more recent literary divas, Hemingway, Plath, Sexton.

But now the shadow of suicide has slipped into the corridors of modern medicine as a potential drug side effect, where it is creating a scientific debate as divisive and confounding as any religious clash.