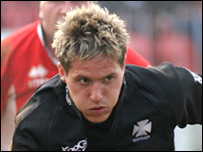 An inquest has recorded a verdict of accidental death on a rugby player who broke his neck during a match.

Neath scrum half Gareth Jones, 28, was injured in a game against Cardiff last April and died in hospital two months later.