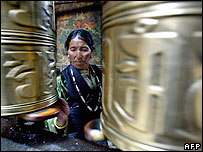 Tibet has become the focus of world attention after violent protests against Chinese rule.

It has long captured the West’s imagination as the site of a mystical Utopia.

Geographically dramatic and remote, it has an average altitude of 13,000ft (4,000m) above sea level and is popularly referred to as “the roof of the world”.

It is isolated not only geographically, but also diplomatically. China enforced a long-held claim to Tibet in 1950, and it was subsequently incorporated into Chinese territory.

Tibet’s spiritual leader, the Dalai Lama, fled to Dharamsala in northern India, where his supporters have set up a government in exile. Meanwhile Tibet itself is rapidly changing, as increasing numbers of Han Chinese arrive in search of work.