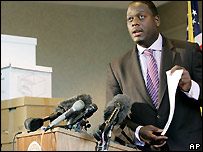 Officials in Dallas, Texas, have unveiled the purported transcript of a conversation between US President John F Kennedy’s assassin and another man.

The transcript records an alleged conversation between assassin Lee Harvey Oswald and Jack Ruby, who killed Oswald before he could face trial.

The two men discuss a plot to kill the president a month before his 22 November 1963 murder in Dallas.

A Dallas official said he did not know whether the transcript was genuine.