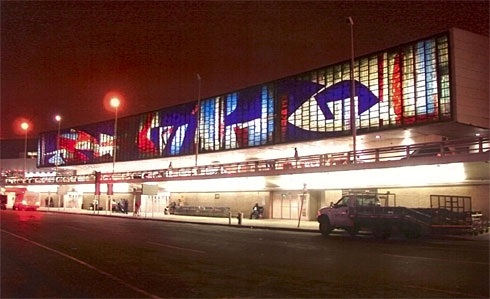 It was called the longest window in the world when its red, sapphire and purple panels were unveiled to airport travelers in 1960. Artists called the window — longer than a football field and more than 20 feet high — one of the most important stained-glass works in the U.S.

But American Airlines quietly began dismantling the window’s 900 panels last week at its old John F. Kennedy International Airport terminal, after years of debate and pleas by employees and artists to find a way to keep the abstract, multicolored piece intact.

Many museums asked to display the window — over 300 feet long and 23 feet high — said it was too large. And the airline said that removing it in one piece, moving it and storing it would cost many millions.

“It’s not necessarily the outcome that everyone might have hoped for,” airline spokesman Tim Smith said Wednesday. “But any solutions were extraordinarily expensive and no one would be able to do that.”

Smith said that small pieces of the window would become floor displays at Kennedy Airport, at the airline’s Fort Worth, headquarters, and at a Long Island museum. The rest is being given to an antique salvage company that is taking down the glass for free.
http://www.usatoday.com/travel/flights/2008-02-20-jfk-stained-glass-wall_N.htm?csp=34