Woolworths has withdrawn the sale of beds named Lolita and designed for six-year-old girls after furious parents pointed out that the name was synonymous with sexually active pre-teens. The findings, published in the British medical journal The Lancet, were based on a three-decade study of Guatemalan males from birth.

Those who had been well-fed soon after they were born earned almost 50% more than those who had not.”

From the page: “For over two centuries, the USA has stood as a beacon for European immigrants in search of increased opportunity and personal freedom. It seems, though, that in the world of football at least, the favour is not one readily returned.

Wild-haired, guitar-plucking defender Alexi Lalas is still the only American to have plied his trade in Italy’s Serie A. Danny Szetela is his only countryman in Spain’s La Liga, and he has yet to make his league debut for Racing Santander, while Benfica recently made Freddy Adu the sole American working in Portugal’s top flight. Germany, Scandinavia and the Netherlands are exceptions to the rule of US exemption, but even in those friendly ports American players are few and far between.

There is, however, one rather gleaming example of a club in a major European League where Americans are more than welcome. Fulham’s Craven Cottage is currently home to no less than five native-born past and present USA internationals.”

Let the door knob hit ya’, where the dog should have bit ya’

Fulham seem to have signed a zombie in defence. I hope he’s one of those 28 Days Rage types otherwise we might have a problem with nippy wingers.

Is there really someone called ‘Eric “Sleeping with” Beinenemy’ or ‘Andre “Bad Moon” Rison’? 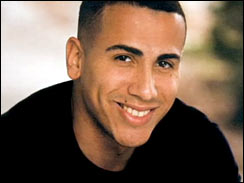 When Sgt. Carmelo Rodriguez was in Iraq, military doctors, he says, misdiagnosed his skin cancer.

They called it “a wart.”

Sgt. Rodriguez III was a father, a soldier, an artist and an actor. He loved life and the Marines. But skin cancer ravaged his body, whittling it down to 80 lbs in 18 months.

Vehicles in band G, those that emit more than 225 grams of CO2 per kilometre, will pay a whopping 25($50) every day to enter the congestion zone. This will mostly affect heavy 44 vehicles. Most other vehicles will continue to pay the daily charge of 8($16).